I picked up Apocalypse Nyx by Kameron Hurley as part of my research into the direction of post modern writing and found a book that channels my old, dusty favorites by Nyx Smith. 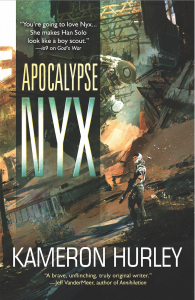 Nyx Smith, if anyone still remembers this author, wrote a series of books for the Shadowrun role playing game. Unlike most Shadowrun books, which were distinctly vanilla in tone and written to a simple plot model, Smith's works were simmering extravaganzas of character, plot, violence, and betrayal that just happened to be set in the crazy enough world of Shadowrun. The novels were so good they developed a distinct crowd of haters; a no good author knows they have arrived until the haters from a faction against their very existence. The problem with the series is that with the eclipse of Shadowrun, no more will likely ever be published.

Enter Nyx (no relation to Nyx Smith), short for Nyxnissa so Dasheem. This character is a Chigurhian terror and a pitiless killing machine, not my type at all, but done in a refreshing way that makes me long for the days of Striper Assassin. Although chronicled in other books, I was right at home immediately with Kameron Hurley's universe, which has enough detail to make the biggest grognard smile but is easy to get comfortable in. The main thing I like about the books though is how easy the author gives us missions that combined equal a novel, without ever feeling we are just living in a short story contestants attempt to sell long format. The stories seem more like episodes in a series than short treatments, which makes me enjoy the piece more than works such as you used to find in the Hammer Slammer vein.

Each story is in essence Nyx, and a cast of wild west inspired extras take on some task, often without much thought. With each "mission", Nyx hurls her extras and herself into the fray with a wild abandon. My favorite extra is the magician who seems bound for red shirt status, but who somehow survives each episode. Nyx, with her Trumpian loyalty, is all about some deep seated desire to maintain power and success without ever revealing whatever drives her. 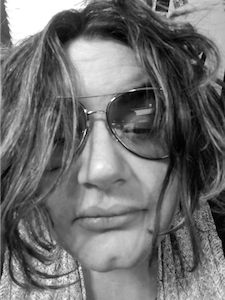 The one negative in the book is that whereas Striper meets her counterpoint in Bandit in Striper Assassin, you truly never end up with Nyx finding any character growing points or a character who can challenge her world view. For a second it is Anneke, but the potential does not last past the first book.

In the end I like this book a lot. I doubt Nyx has enough depth to become a Drizzt-type hero that can span dozens of books, but in releasing Apocalypse Nyx Kameron Hurley has made a valid attempt to explore an interested character in a well-developed universe. As for the relationship the writing has to my old favorite; I can tell I will be buying more of Hurley's works because whatever limits their are to Nyx, there are no limits to the universe Ms. Hurley creates. My first experience was well worth the cost.